You might like to know a little more about the folks who have been planning and working around the clock to make this happen!

Aman is a software developer with one of those big database companies. He devotes his free time to his love of photography. For Barcamp Bangalore, he takes care of the website design, brand design and the scheduling system.

Daakuism!! what else do you expect!!

Tests enterprise software by the day, writes JS and PHP by thenight. Loves to read, attend music concerts, find new places to eat, collect T-shirts at different hacking competitions and drink lots of tea and coffee. Some people also say that he yaps a lot.

Barcamp Bangalore is the best place to meet fun, creative and smartpeople in Bangalore. Also, my first proper event team in the city

Oracle Forms and PL/SQL developer by day, gamer and procrastinator by night, Stack Exchange Community Moderator whenever free. Though database development is my bread and butter, I can write an app or two, or few scripts in Ruby, Python and C#. I also look after BCB’s servers and handle BCB’s social media accounts.

Barcamp to me, is being able to strike up a conversation / discussion about anything at any point and come out of the discussion with some new ideas and techniques – that’s something which only twitter has offered as a medium.

A technologist trying to make a dent in the Universe. Long time participant and planner for BCB—expanding the world of sharing and learning.
Developer who does programming. Already written essays in Assembly, C, C++, Java, Javascript, Python, Pascal, PHP, Javscript and HTML.

My parents warned me about the drugs in the street but never of the ones in books and on the internet. Studying Economics, Business Studies and Web Development at New York University. Fascinated by financial markets, technology, science and people. Like listening to Progressive House, watching Seinfeld, eating food and learning new things.

Opinionated technologist who changes those opinions as new facts come in. A long term Barcamp attendee who is interested in keeping the Barcamp Bangalore brand fresh and independent.

Zen Master @bizodyssey, helping various startups shape their ideas in to products and sail through user experience and product marketing challenges. Beyond work, I am a sprint level triathlete who loves to spend time reading biographies and discuss world politics at length.

Fagun Bhavsar, a QA professional, attended the first ever Barcamp in Bangalore in 2005. Since then, have been regular at it. I take care of QA stuff and make sure everything gets chaotic before it gets calm. 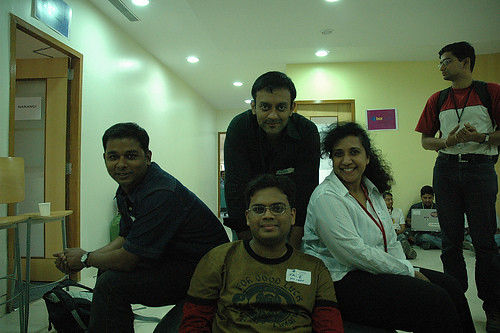 Please let us know if we’ve missed you!

One thought on “Meet The Team”